Year 1 Race to the Top in Massachusetts: An Education Progress Report

In 2010 Massachusetts received a $250 million award through the federal government’s Race to the Top education grant competition. The following year we collaborated with the Massachusetts Business Alliance for Education to report on the state’s progress towards implementing key Race to the Top Reforms: (1) Evaluating educators based, in part, on student growth; (2) Revamping academic standards to meet college- and career-readiness goals; (3) Turnaround for low-performing schools; and (4) Improving statewide student data systems.

We found that Massachusetts was mostly successful in meeting its goals for the first year of the grant. Notably, the state hired staff in key areas and built internal capacity, began raising awareness about new Common Core State Standards and piloted a new teacher and principal evaluation system that incorporated measures of student growth. We also found that the state’s efforts to develop and roll out a new data system and turnaround low-performing schools were stalled. Overall, the state was on track to meet its goals, providing it ensured that reforms were implemented with quality at the district level. 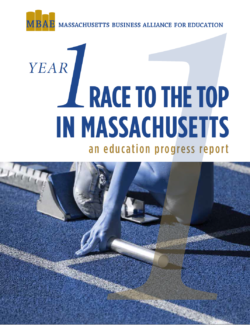 Year 1 Race to the Top in Massachusetts: An Education Progress Report

Race to the Top

Other
Be sure to visit our Focus Areas and Services pages to learn about the scope of our work.